Encased in temperature-controlled glass cabinets, mummies are often a star attraction at some of the world’s greatest museums. For centuries, mummies were viewed as nothing more than money-making commodities. Thankfully, attitudes have drastically shifted.

But what exactly is a mummy? 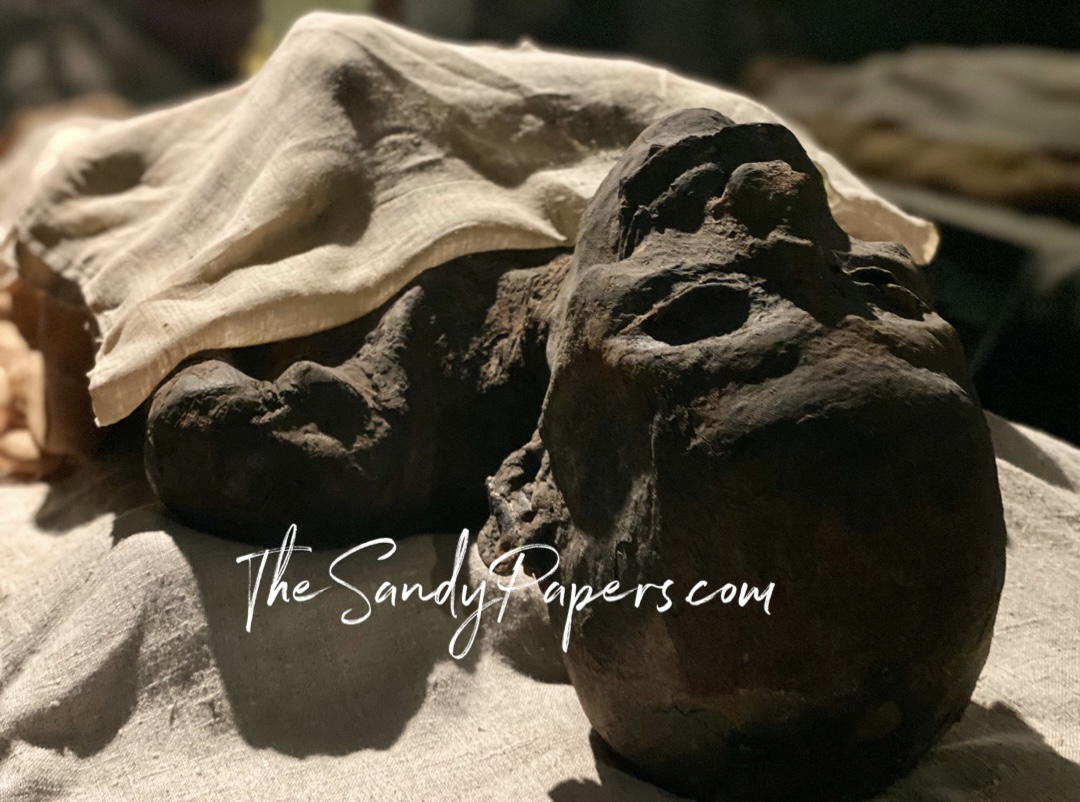 The mummy of Rameses I as displayed at Luxor Museum, Luxor, Egypt.

The word ‘mummy’ refers to the dead body of a human being or that of an animal whose soft tissues and organs have been preserved by either intentional means or by accidental exposure to extreme conditions. Practiced throughout most of early Egyptian history, mummification refers to the specific methods used by the Egyptians to remove all moisture from the body, leaving only a dried form that would not easily rot or decay.   You may have viewed a mummy on display at your local and national museum.   In fact, this may be how your interest in Egyptian history was initially sparked.

But did you ever wonder how a mummy becomes a mummy? 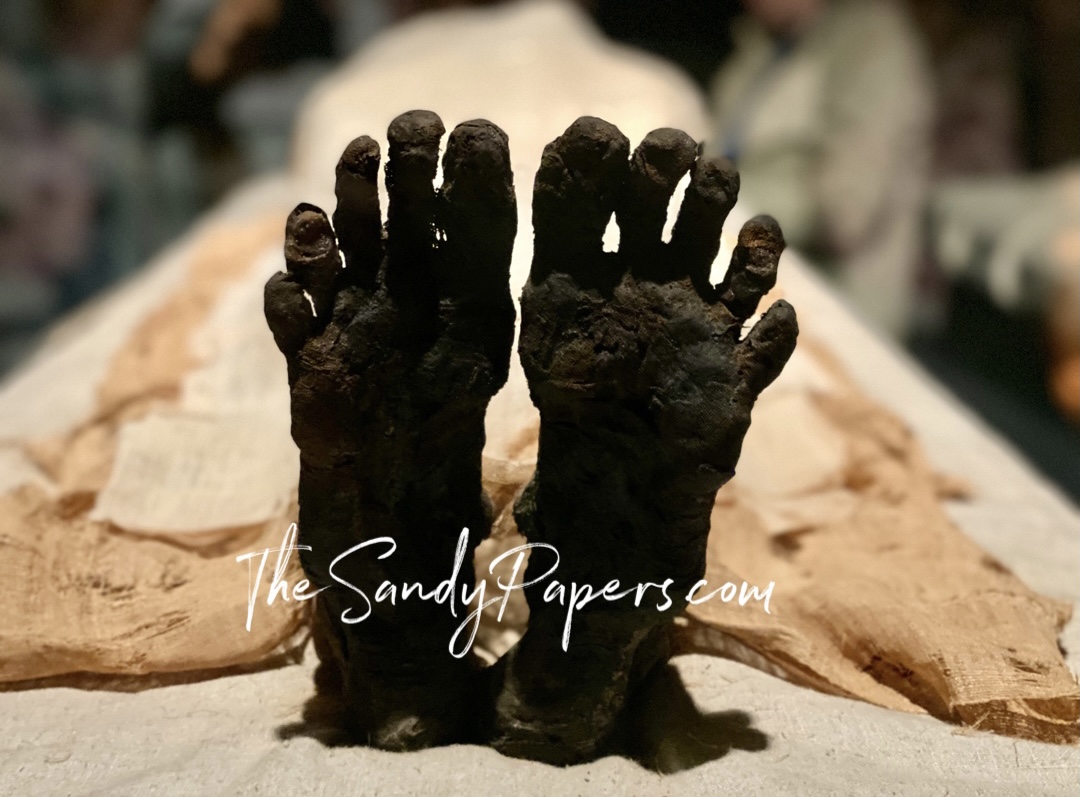 The mummified feet of Ramesses I as displayed at Luxor Museum, Luxor, Egypt.

How to Make a Mummy:

Step 1.  First, the body must be purified and washed.

Step 2.  Next, all internal organs must be removed, except for the heart, which is left in place.  This is the core of the person/animal.

Step 3.  Remove the brain.  Hammer a chisel through the bone of the nose.  Next, insert a long, iron hook up the nasal passage and yank the brain out through the nose hole.  Finally, scoop out any remaining bits with a long spoon.  Thrown the brain away.

Step 4.  Place the lungs, liver, intestines and stomach in four canopic jars, one jar for each organ (two lungs share one jar).

Step 5.  Fill the body with some stuffing to make it appear normal.

Step 6.  Dry the body out by using a substance called natron.  Nearly identical to salt, it draws all of the moisture out of the body.

Step 7.  Somewhere between 40 and 50 days later, remove the body from the natron and replace the original stuffing with fresh stuffing made from sawdust or linen.  If desired, add some false eyelashes.

Step 8.  Carefully wrap every area and inch of the body in hundreds of yards of linen, making sure to wrap each finger and toe separately.

Step 9.  Place a final covering on top of the body.  This article is called a shroud.

Step 10.  Place your mummy in a stone or wooden container called a sarcophgus.

Your mummy is now complete! 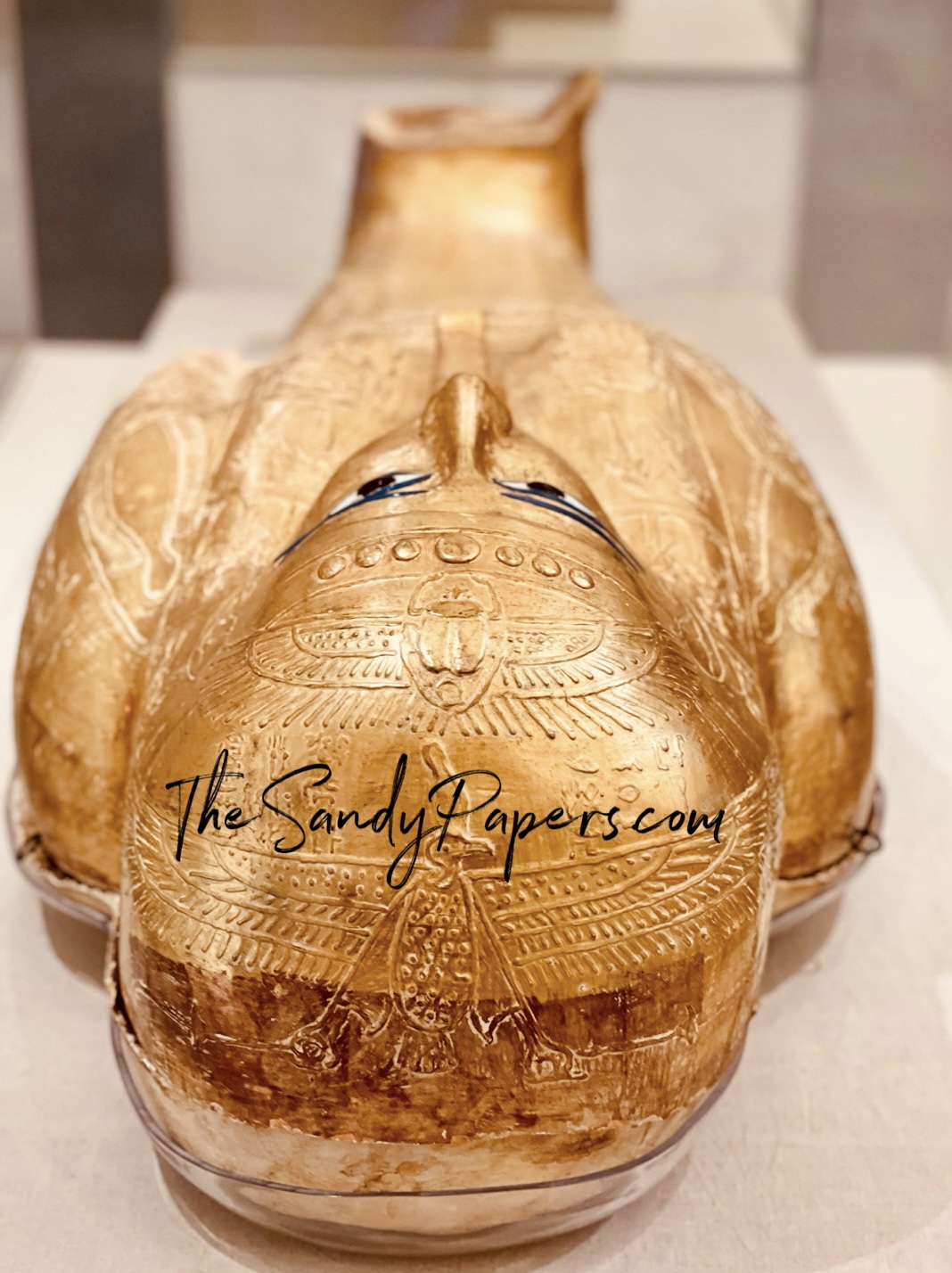 In total, the mummification process takes 70 days. Special priests worked as embalmers to both treat and wrap the bodies.  To the ancient Egyptians, it was vitally important to preserve the dead body in as life-like a manner as possible.  Their efforts were so successful that today we can still view the body of a mummified Egyptian from thousands of years ago.

Egypt’s National Museum of Egyptian Civilization (NMEC) in Cairo, Egypt is the perfect place to do exactly that.  Mummies of 18 kings and four queens moved into this beautiful, brand new museum in stunning style earlier this year.   On April 3, 2021,  a spectacular procession of floats carried the mummified remains of the 22 pharaohs, including Egypt’s most powerful ancient queen, Hatshepsut, from the iconic Egyptian Museum to their new resting place in Old Cairo.

The ethics of displaying ancient Egyptian mummies have long been the subject of heated debate. Mummy exhibits continue to be big draws for museums, but curators and scholars alike are still grappling with issues of cultural sensitivity.   This may be why no photos of the 22 mummies are strictly prohibited.  (The pictures I took above are of Ramesses I as displayed at Luxor Museum, Luxor, Egypt.) Furthermore, there are very clear instructions on what the ancient Egyptians wanted to happen to their bodies after death — and that does not include unwrapping them or displaying mummies out of their coffins.

Still, in my opinion, a visit to NMEC is an absolute must on your next visit to Cairo.   Please remember to be respectful during your visit.  If not, our ability to admire what remains of the honored ancient Egyptian art of mummification may be forever taken away.   x Sandy 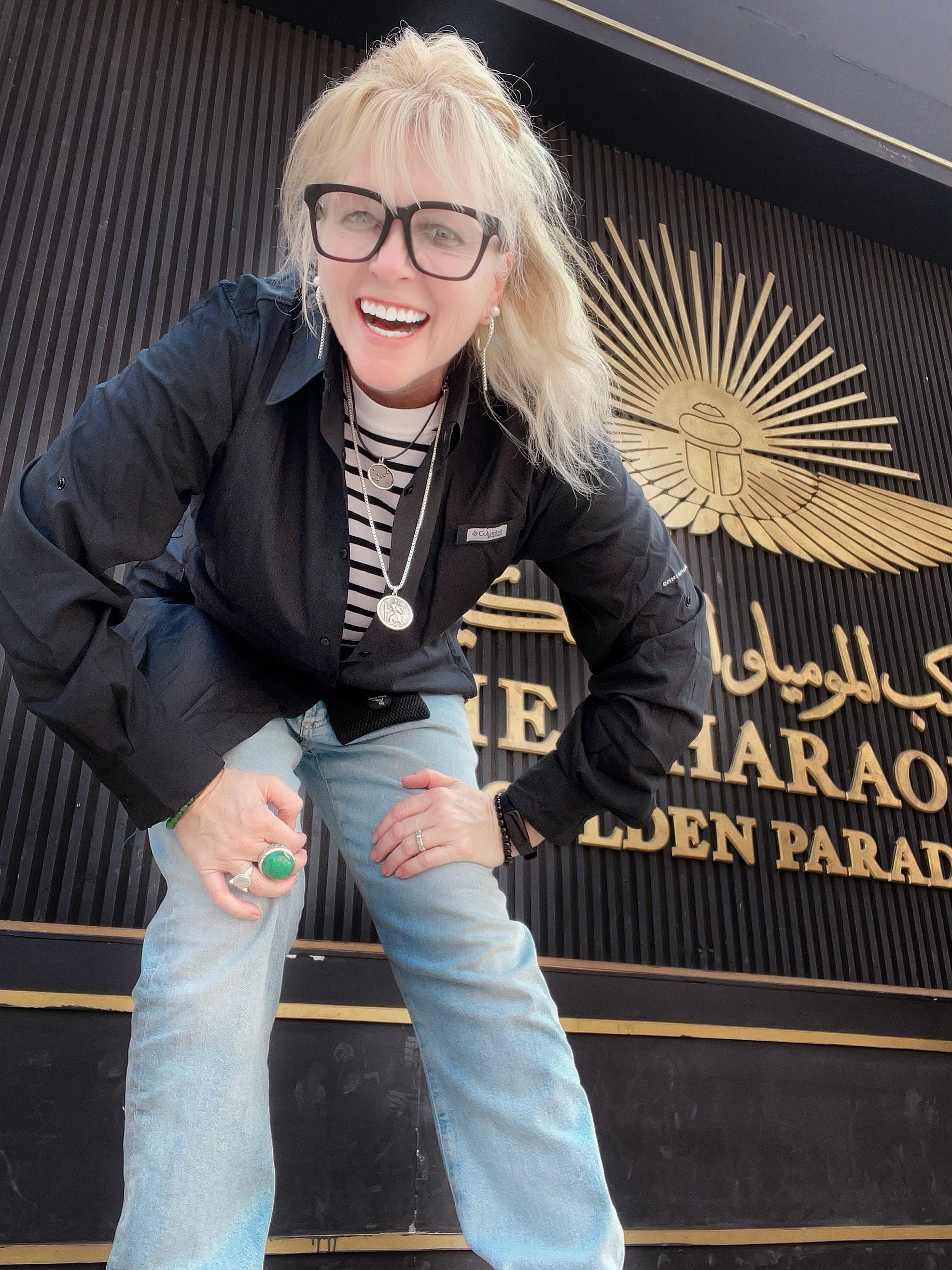 Me, outside the entrance of the wonderful new National Museum of Egyptian Civilization on November 17, 2021.