Dressed in their iconic red coats and bearskin hats, the Queen’s Guard exemplify classic British pomp and no visit to London would be complete without witnessing this world-famous ceremony.  The Changing of the Guard is a centuries-old tradition steeped in custom and is led by experienced, front-line soldiers.

For more than a millennium, the British royal family has captured the imagination of countless people, British and otherwise.  However, there is another group of people that spend a lot of time at Buckingham Palace; and, while far less famous, they are, in my opinion, just as intriguing.   Notoriously silent and stoic, the Queen’s Guard raise a lot of questions:

Who are they?   How did they land the job?  Just how heavy is that hat?  Will they get sacked if they smile?

So, here we have it:  The nine most interesting things I’ve learned about the Queen’s Guard. 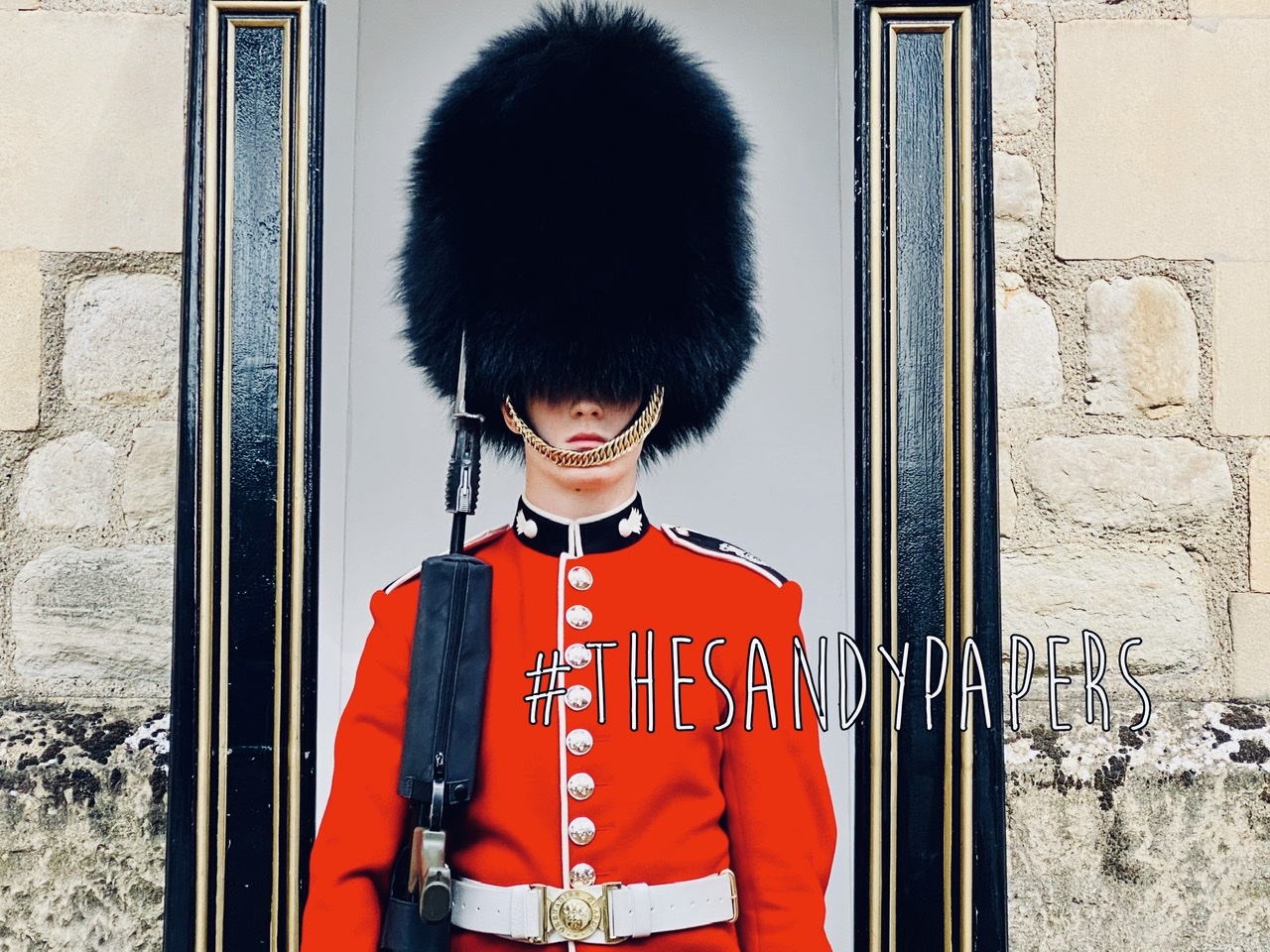 Their enormous bearskin hats are secured under the nose of the guards instead of under the chin.

1.  The story behind those enormous bearskin hats.

An iconic feature of the royal guards’ uniform, the black bearskin hats date back to the 17th century.  At the time, the gunner in the French and British armies wore these giant hats to make them appear taller in an effort to intimidate their enemies.  During his reign in the early 19th century, the French Emperor Napoleon dressed his imperial guards in similar hats.  As the British defeated Napoleon’s army during the Battle of Waterloo, they collected the bearskin hats from the dead men and brought them home as trophies.

Stranger still, these massive hats are secured under the nose or lip of the guard instead of under the chin.  This is to protect the guard’s neck in combat.  The hat is so heavy that, if it was tied beneath the chin and the guard was shot during an attack, the hat could drop backwards, causing the guard’s neck to snap in half.   How heavy is it, you ask?   Measuring 18 inches in height, it weighs about nine pounds bone dry.  Imagine how heavy it gets when it rains!

2.  The Queen’s Guard protects all of the royal palaces.

While we might only associate these iconic guards with protecting Buckingham Palace, they also play an active role in guarding many other royal landmarks, too.   In fact, it is the duty of the Queen’s Guard to protect all of the British monarch’s residences.  This includes Windsor Castle, the Tower of London and St. James’ Palace.  They can also be spotted guarding Edinburgh Castle and the Palace of Holyroodhouse in the Scottish capital city of Edinburgh. 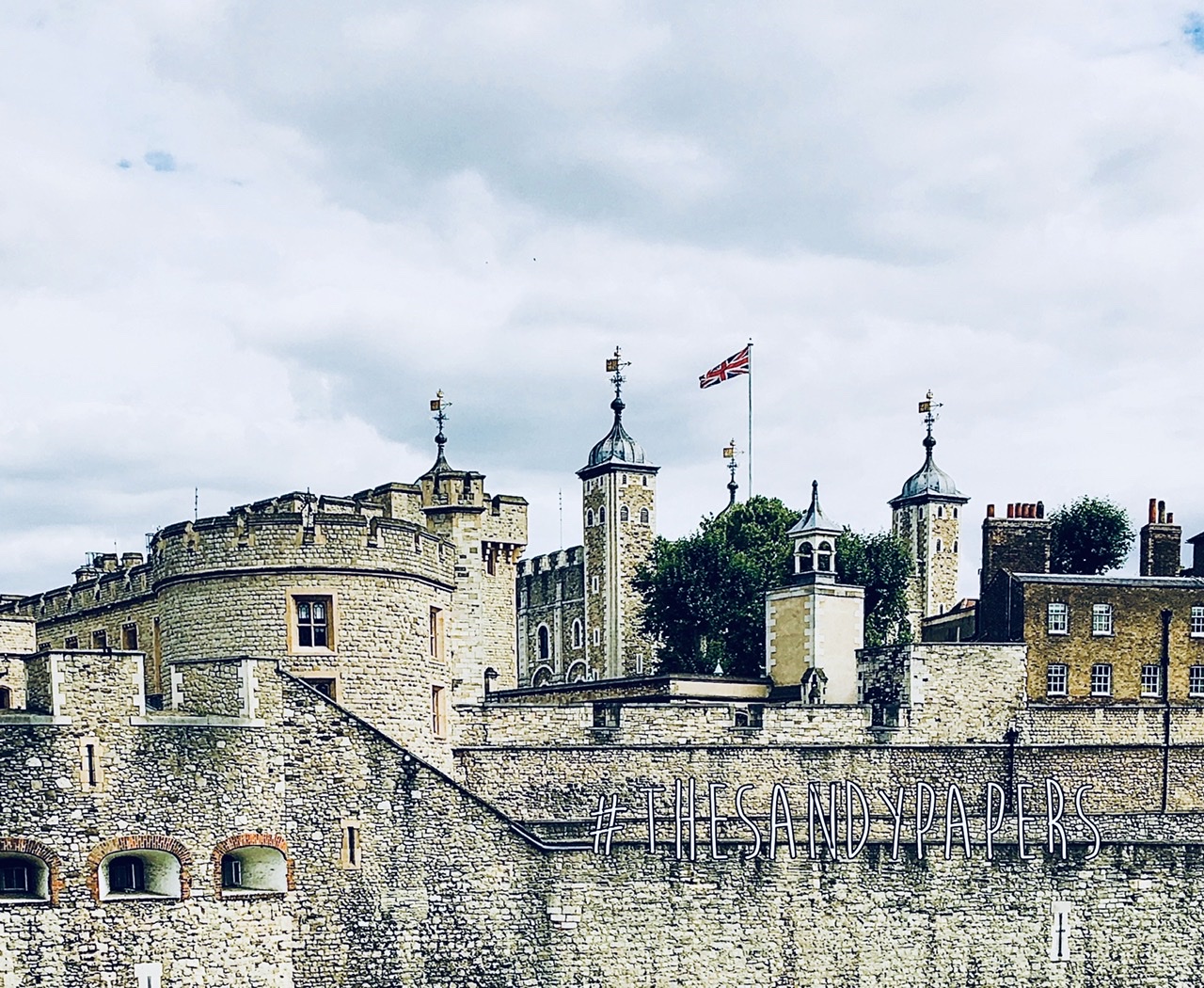 The Queen’s Guard protects all of the royal palaces, which includes the Tower of London.

First, you have to apply to join the British army.   If approved, you then specify which regiment you would like to join.  To guard the Queen, you must join one of the Infantry or Calvary regiments which collectively form the Household Division.  Because the Guard is basically a military organization, candidates must pass the BARB, or the British Army Recruit Battery test.  According to one user on Reddit, the BARB tests you “basic logic and smarts.”   The other requirement he mentions?  “You must be tall.”

For the Changing of the Guard, a full military band is provided, usually from one of the Guard’s Regiments, whose origins go back to playing morale-boosting music before a battle.  They also provided a beat with which to march into battle.  Music played during the guard changing ceremony has always been a mixture of traditional and popular music of the day.  It is said that on one occasion in 1920 the band was playing a piece from a popular operetta when a footman arrived with a message from King George V addressed to the Director of Music.  He excitedly read the note, only to find it read, “His Majesty does not know what the Band has just played, but it is never to be played again.” 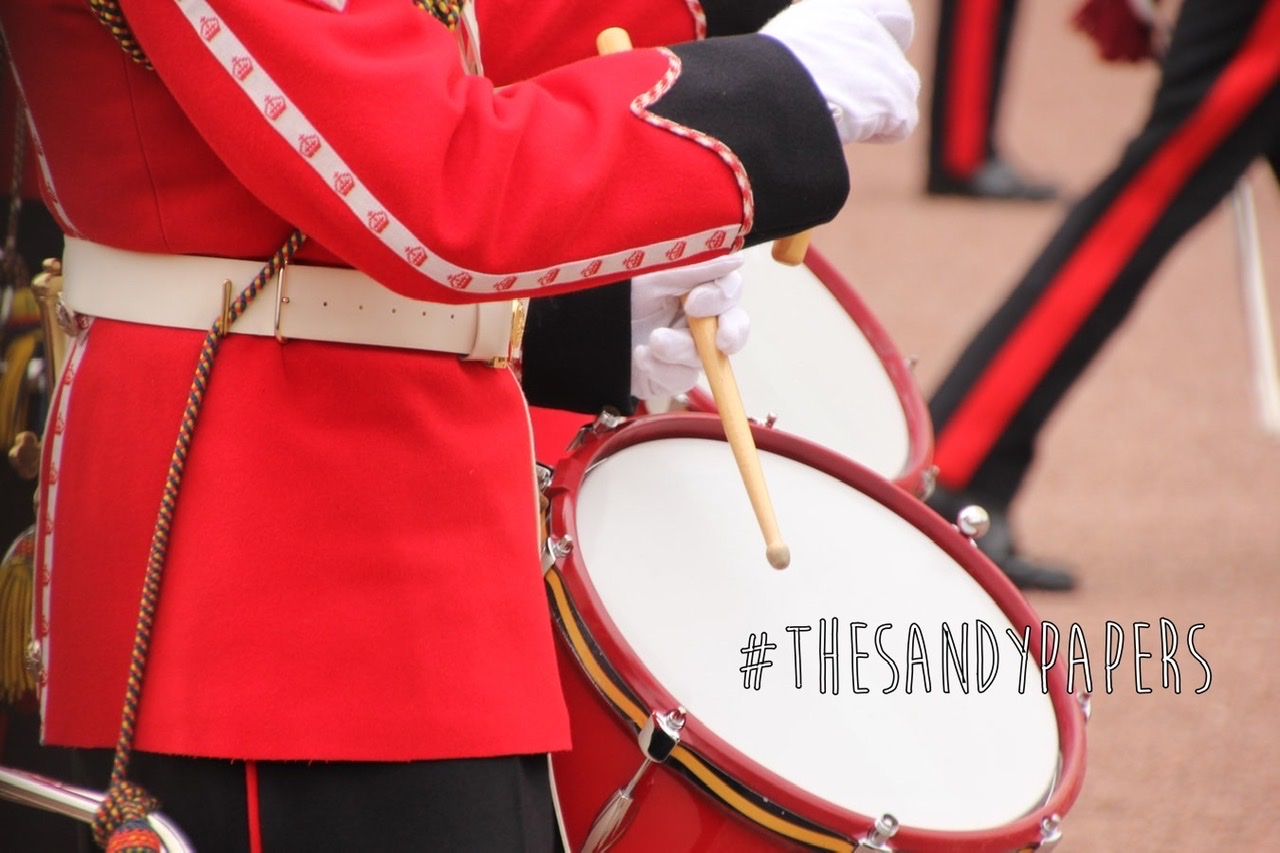 For the Changing of the Guard, a full military band is provided, usually from one of the Guard’s regiments.

Queen Elizabeth II is not only the head of state of the United Kingdom.  She also fulfills the same constitutional role for the 15 other countries.  Referred to as the Commonwealth Realms, they include Canada, Australia and New Zealand.  Oaths of Allegiance are taken by servicemen in the Commonwealth Realms and they are sworn to serve the monarch.  Consequently, these loyal troops also serve in the Queen’s Guard.

6.  They will not smile for your selfie.

People will do almost anything to get one of the expressionless guards to crack a smile, but what most tourists don’t realize is that, if a Queen’s Guard is caught smiling or laughing, it could cost them.   Big time!   It is said the fine can be anything from a few days’ pay to an entire week if they are caught.

The Queen’s Guard can break their silence to yell if visitors come to close to them or act aggressively.  Most commonly, they are known to shout “make way for the Queen’s Guard!” at tourists who come too close.  Speaking anonymously on Reddit, one veteran revealed, “We are legally allowed to attack and kill people who pose a threat to the life of myself or others.”

8.   Even fainting has to be done a certain way.

Standing outside for hours on end in the sweltering sun while dressed in a giant fur hat and layers of thick clothing isn’t easy and even the most disciplined of guards can succumb to the heat.   But even when fainting, protocol must be followed.  If they begin to feel light-headed, the guards are instructed to “faint to attention”, meaning they have to keep their disciplined pose even when falling to the ground.  This explains why you often see pictures of fallen guardsmen lying face down on the ground and ramrod straight.

Standing outside Buckingham Palace, the Queen’s Guards can’t take a bathroom break during their shift.

Ever wondered if the Queen’s Guard are permitted bathroom breaks? The answer is no.  They’re not permitted to leave their posts, not even to go to the bathroom.  Ever wondered why their pants are black?   You can see where I’m going with this.  If a member of the Queen’s Guard does need to relieve himself during his two-hour shift, he is instructed to take care of business without leaving his position.  As stated by Guardsman Shaun Marsden, their thick woolen trousers “are sufficiently dark to cover their embarrassment.” 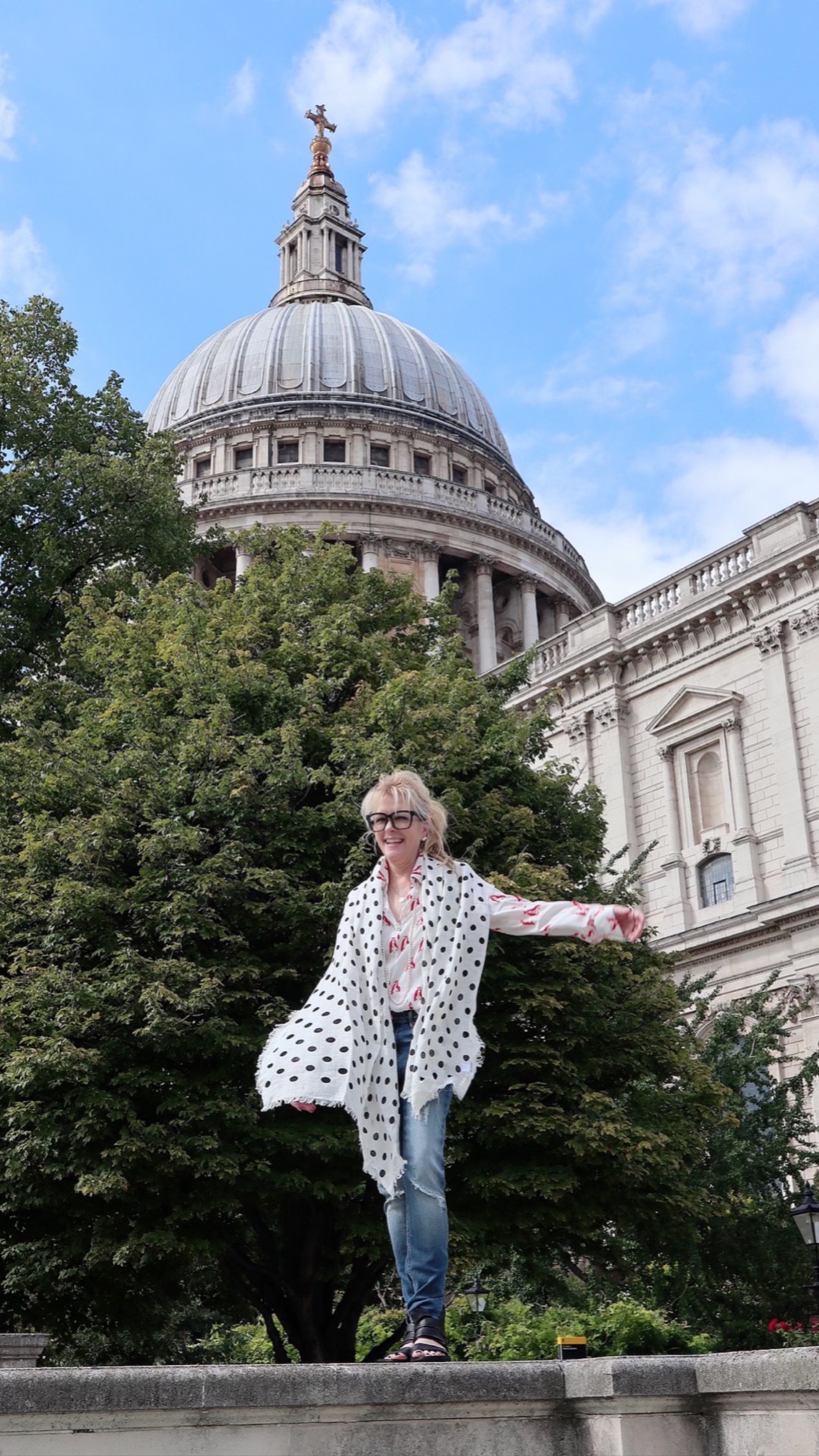 Drowned, Decapitated and Drop-Dead Crazy: The Island of...