The murder of David Rizzio on March 9, 1566 was, quite possibly, the most dramatic moment in Scottish history.

But I’m getting ahead of myself.

Born in 1533 just outside of Turin, Italy, David Rizzio was a good musician and an excellent singer. An expert musician herself, Mary, Queen of Scots, also happened to be looking for a bass to sing in a quarter of French singers. After only two performances for the queen, Mary liked him so much that she offered him a job as a gentleman of the privy chamber. While some in the Scottish court found Rizzio to be an ugly little man, some found him quite affable. With his expensive taste in clothing coupled with an overinflated sense of self-importance, trouble began brewing behind the palace walls.

Seigneur Davie, as he came to be known, did everything in his power to curry favor with Mary and was constantly in her company, so much so that those seeking favors of the Queen soon learned to bribe Rizzio to get what they wanted. Soon enough, some Scottish lords grew to resent Rizzio’s power over the Queen.

Fast forward to 1565. When Henry Stuart arrived in Edinburgh from England, Rizzio struck up a fast friendship with him and urged Mary to marry him. Mary quickly fell in love with Darnley and they were married on July 29 of that same year, a decision she soon came to regret.

By all accounts, the marriage was an unhappy one. Darnley proved to be a weak, immature womanizer — and a raging alcoholic. To make matters worse, he was constantly pressuring Mary to give him the crown matrimonial, making him King in Scotland, which she was loathe to do because of his behavior.

With the seeds of discontentment sown, the Scottish lords soon realized they could use Darnley as a weapon against Mary and worked to increase his bitter resentment in their favor. Further complicating matters, Mary was pregnant. And you can probably guess what happened next. Whispers turned into rumors and the rumor was that Mary’s child belonged to Rizzio.

Rage and resentment having reached a deafening crescendo, a conspiracy was set into motion. The date is March 9, 1566.

Seven months pregnant at the time with her only child, the future James VI, the Queen was in her private bedchamber having dinner with Rizzio and her half-sister, Jean, with her ladies-in-waiting also in attendance. Leading the conspirators up the narrow private staircase to the Queen’s Bedchamber, Darnley burst into the room. Holding Mary’s belly at gunpoint was Andrew Kew of Fawdonside. Darnley demanded that Mary turn over Rizzio. The Queen refused. Despite clinging to the Queen’s skirts, George Douglas, Darnley’s uncle, grabbed the dagger from Darnley’s belt and stabbed Rizzio in the presence of the Queen. Mary pleaded for Rizzio to be tried if, indeed, he had committed any offense, but her pleas were ignored. Rizzio was then dragged to the adjoining chamber where the blows rained down on his tiny body. Ultimately stabbed a mind-blogging 57 times, Rizzio was dead.

After the violent struggle, Darnley ordered that Rizzio be thrown down the main staircase, where he was then stripped of his jewels and the fine clothing that he had been wearing. Darnley’s dagger was still in the dead man’s chest.

Mary was shaken, crying and in shock. It took several hours to confirm, but the news finally came that Rizzio was dead. Upon confirmation of his death, Mary shouted, “No more tears! I will now think of revenge!”

Convinced that she and her unborn child were the real targets of the conspiracy, Mary soon realized that she would most likely become a captive of the murdering lords. Darnley withdrew to his room while Mary spent a sleepless night considering her situation with 80 men standing guard outside her door and at the palace gates.

What followed next might well be considered one of Mary’s finest hours. With her own life and that of her unborn child’s in grave danger, she put her political skills to excellent use. Mary convinced Darnley that the child she was carrying was his and that, together, they could overcome their marital difficulties. Two nights after the murder, Mary and Darnley escaped Holyroodhouse to the fortress of Dunbar Castle via an underground passage. Mary was ready to reassert her authority — but she never forgave her husband’s treachery.

Early in the morning of February 10, 1567, Kirk o’ Field house in Edinburgh was destroyed by an explosion. The partially-clothed bodies of Darnley and his servant were found in a nearby orchard, strangled but unharmed by the explosion. Suspicion that Mary had played a part in Darnley’s demise led to her losing the Scottish throne, ultimately forcing her to abdicate in favor of her infant son in July of 1567.

The world will never know.

Ready to book your next vacation: Start here: Sandy Nelson, The Sandy Papers, (703) 975-1747, TheSandyPapers@aol.com, TheSandyPapers.com, Specializing in Europe and the Exotics 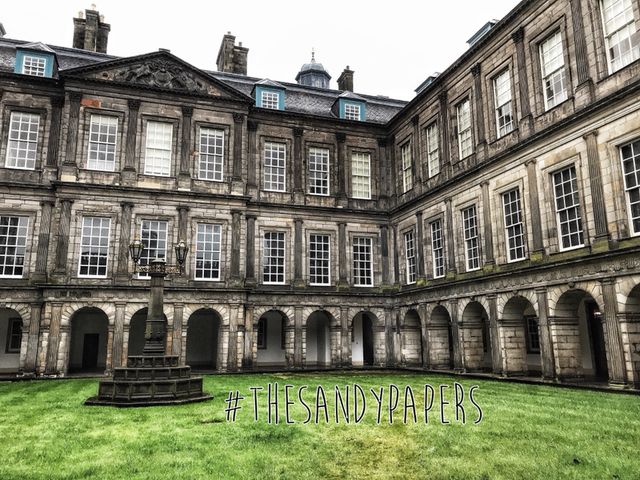 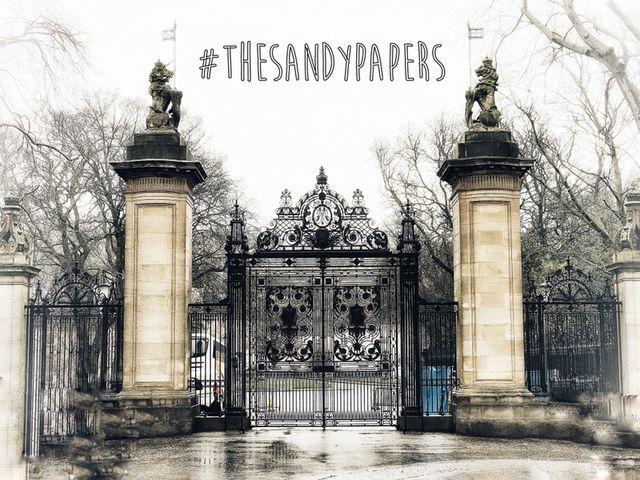 Entrance to the Palace of Holyroodhouse.

Standing outside of Holyroodhouse on Friday 13, 2018 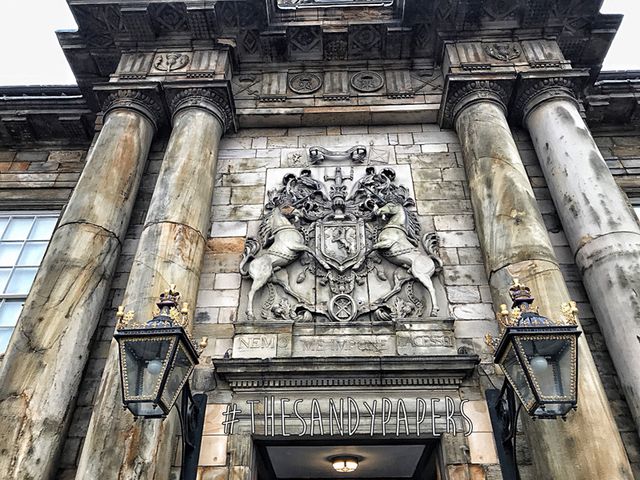 Notice the unicorns in the Royal Coat of Arms? The Unicorn is the National Animal of Scotland! 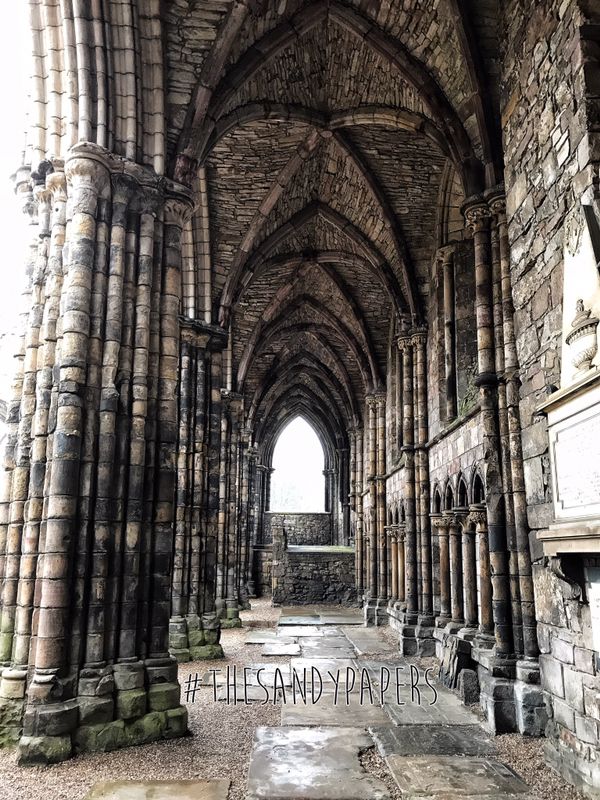 Holyrood Abbey was once one of the grandest medieval abbeys in Scotland. 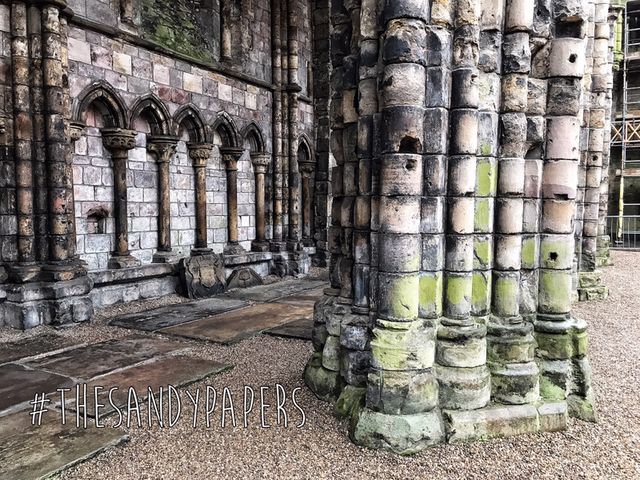 The Abbey was enlarged over the centuries and the surviving roofless nave is a must-see when visiting Edinburgh.