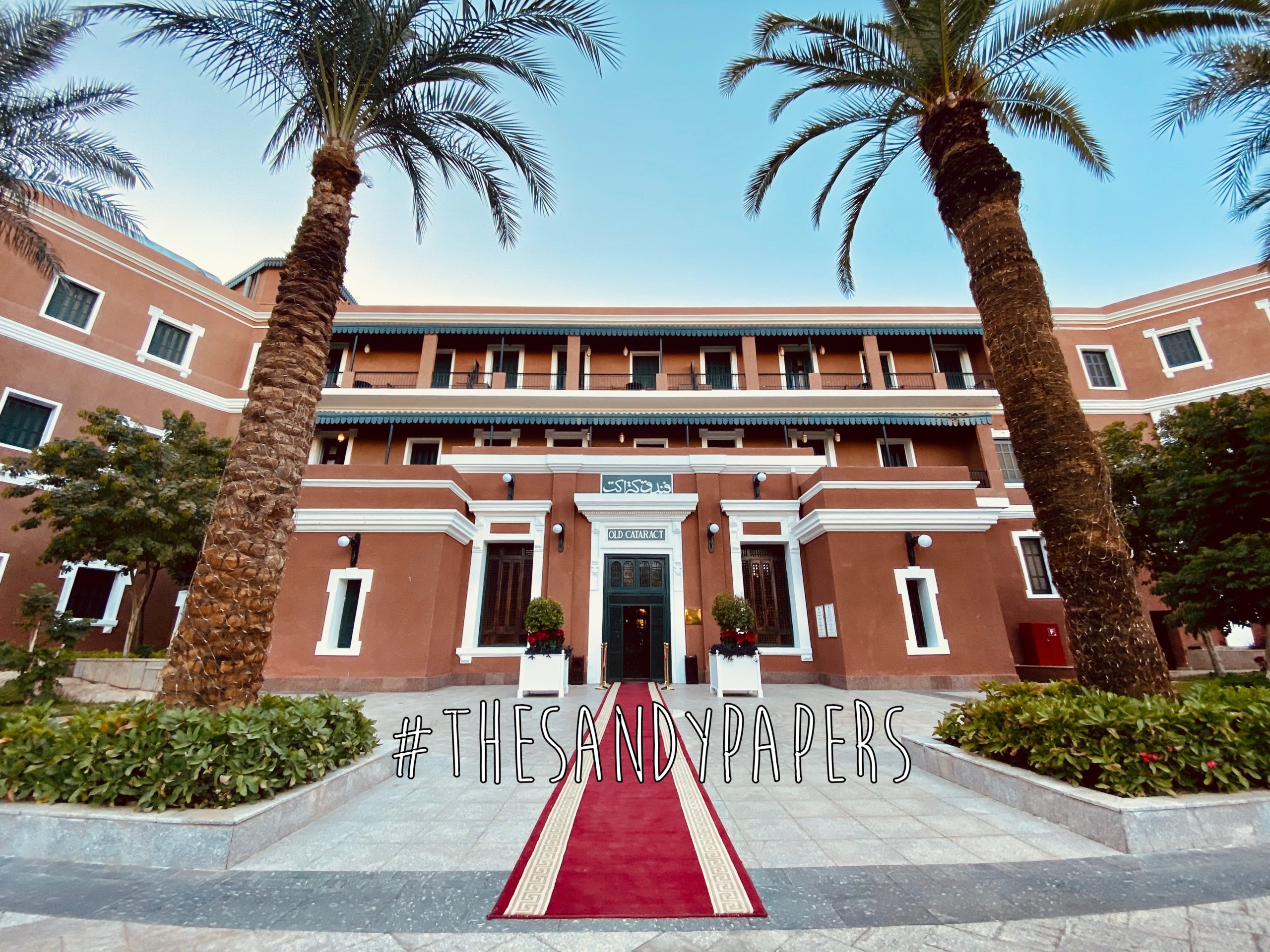 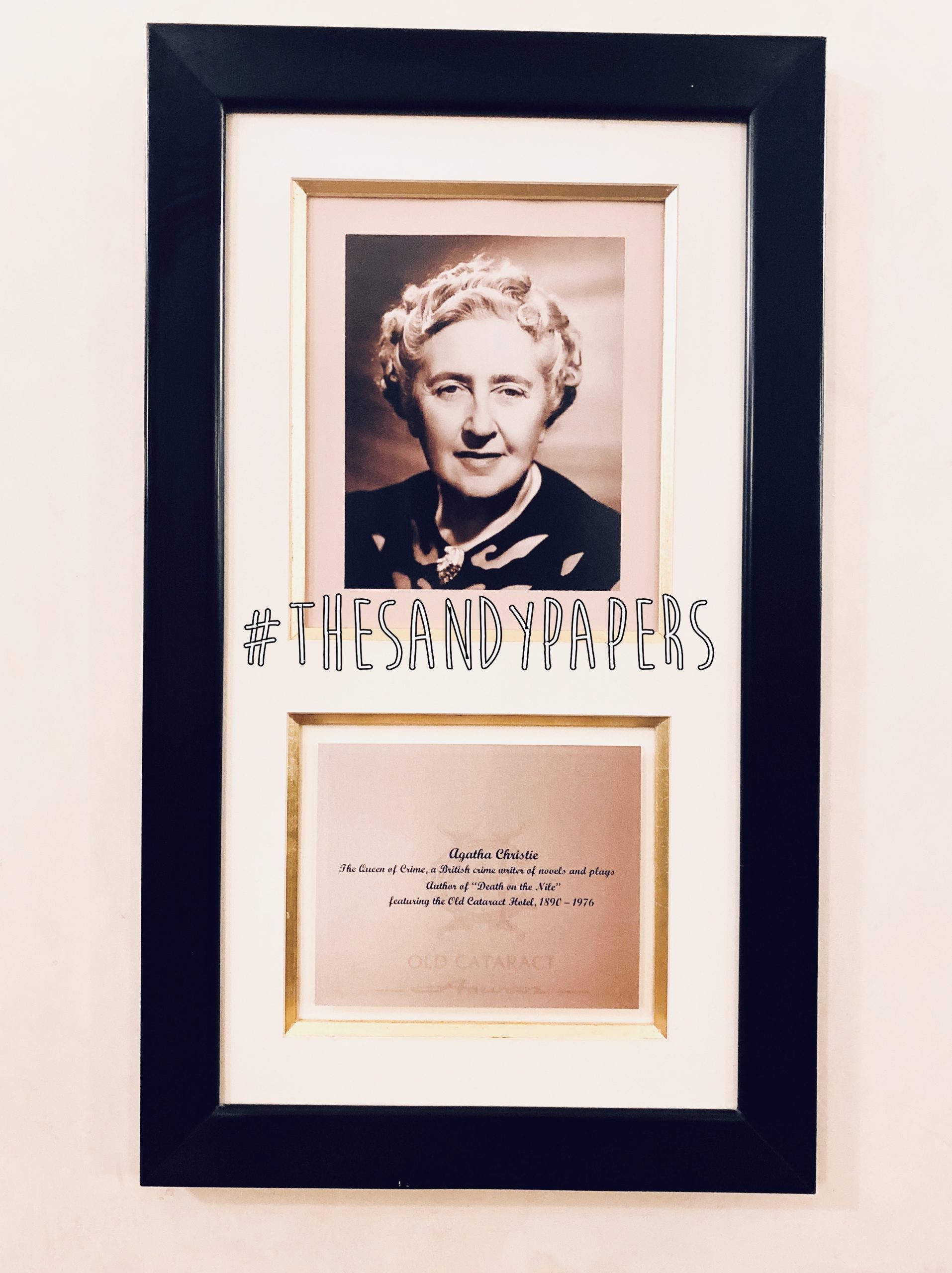 This lovely plaque hangs on the wall to the left of the door. It reads: Agatha Christie The Queen of Crime, a British crime writer of novels and plays Author of ‘Death on the Nile’ featuring The Old Cataract Hotel, 1890-1976 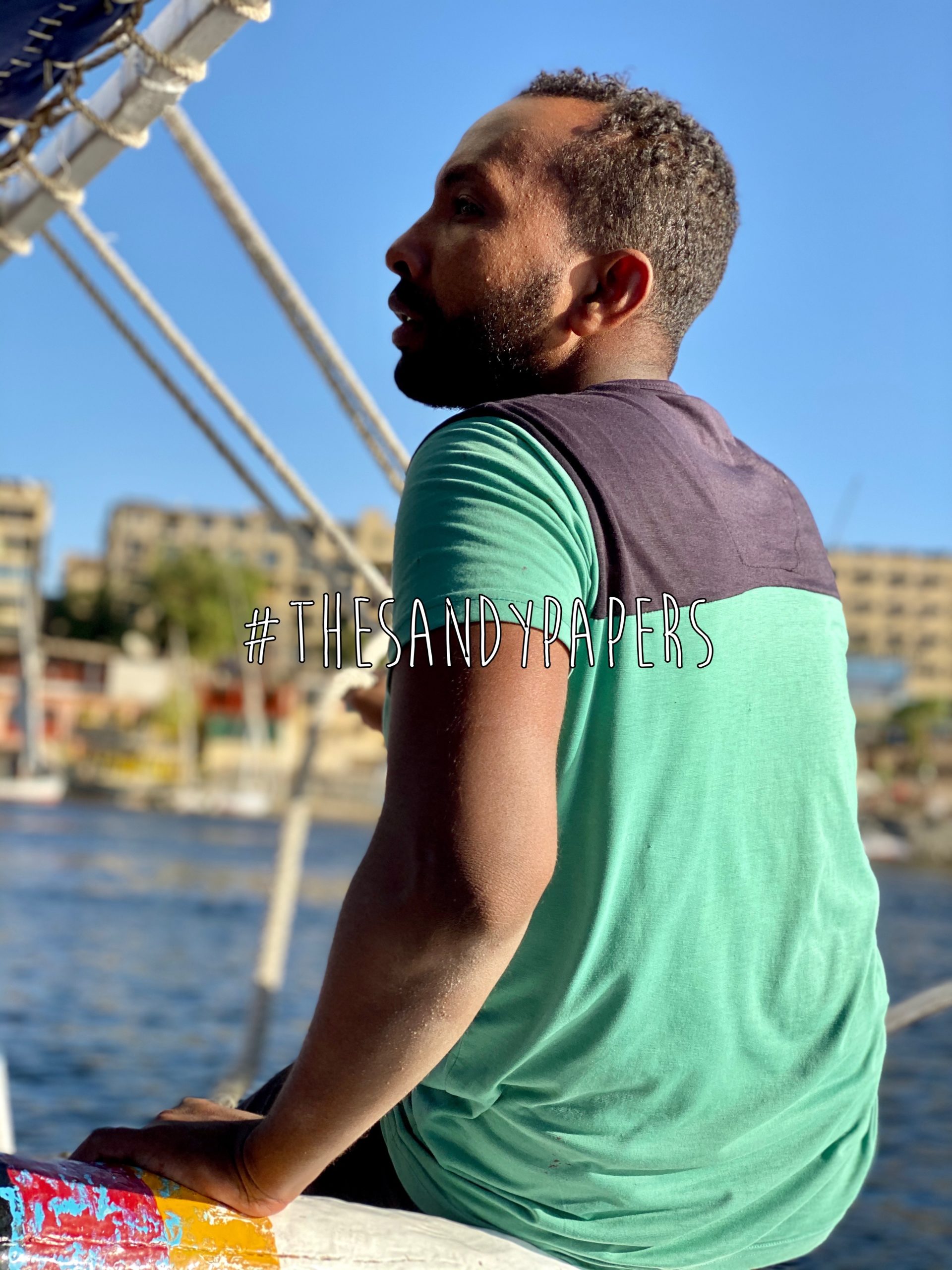 As my felucca approached, a wave of excitement washed over me. I was about to retrace the steps of Dame Agatha Christie!

Of all the Old Cataract’s famous comings and goings, its most talked about and remembered guest arrived in 1937.  No one knows for sure whether Christie intended to stay for as long as she did when she checked in, but we do know she remained here for the better part of that year.   And, as you wander the grounds, you can certainly see why Christie fell in love with the place. 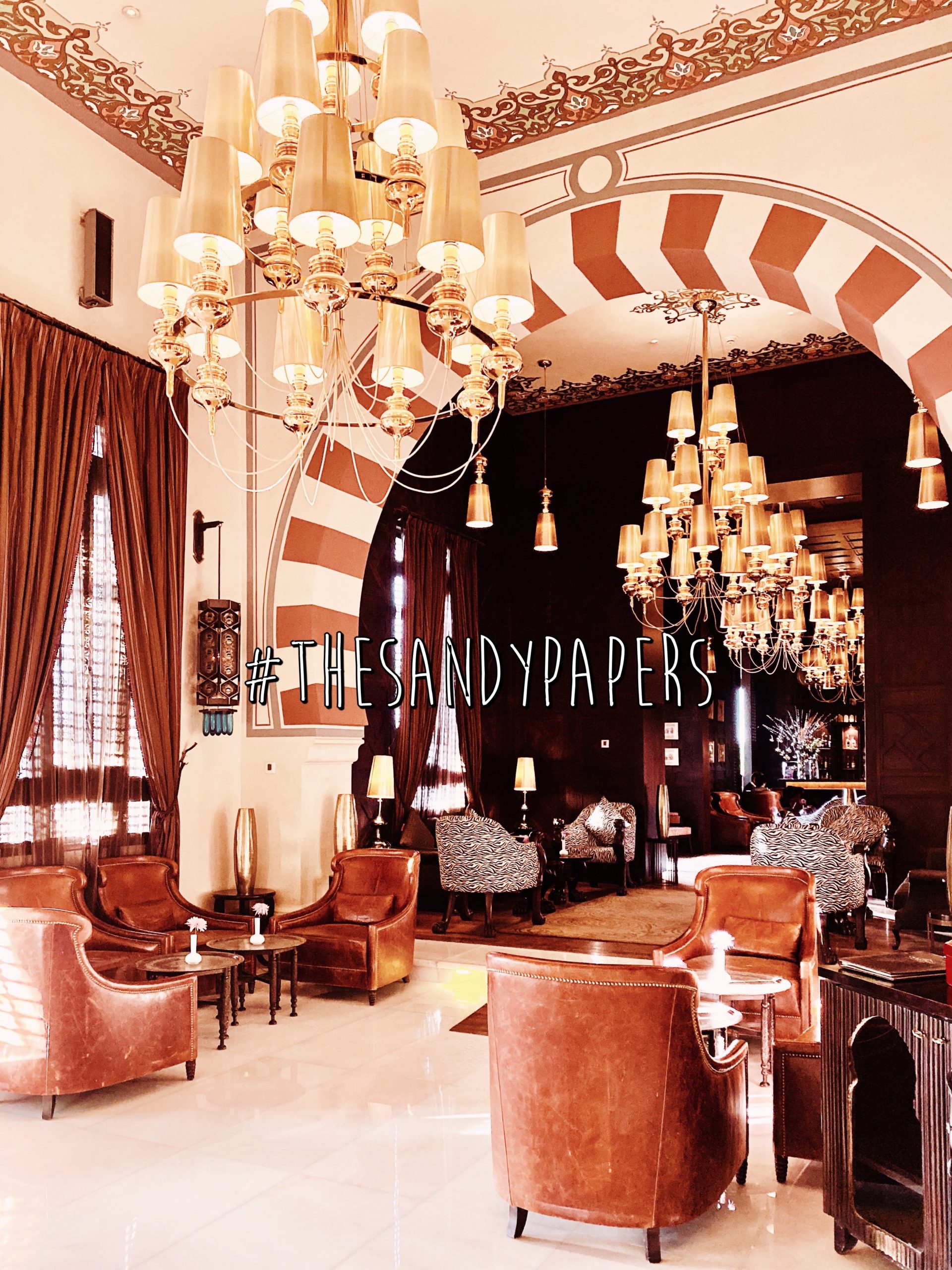 Sweeping views, lush gardens and lavish furnishings, The Old Cataract quickly became Christie’s muse for not one but two of her most famous novels, Death on the Nile and Death Comes as the End.  Additionally, not only was the 1978 movie version of Death on the Nile filmed here, but the 2020 remake is currently underway.

The library is beautifully furnished with three velvet Chesterfield sofas, perfect for sinking into with a good Agatha Christie novel.

On the way to the bar, you’ll find the library, which has been beautiful furnished with three velvet Chesterfield sofas, perfect for sinking into with a cup of tea and a good Agatha Christie novel (or two).  You can also still find the very desk and chair she used while writing Death on the Nile on display! 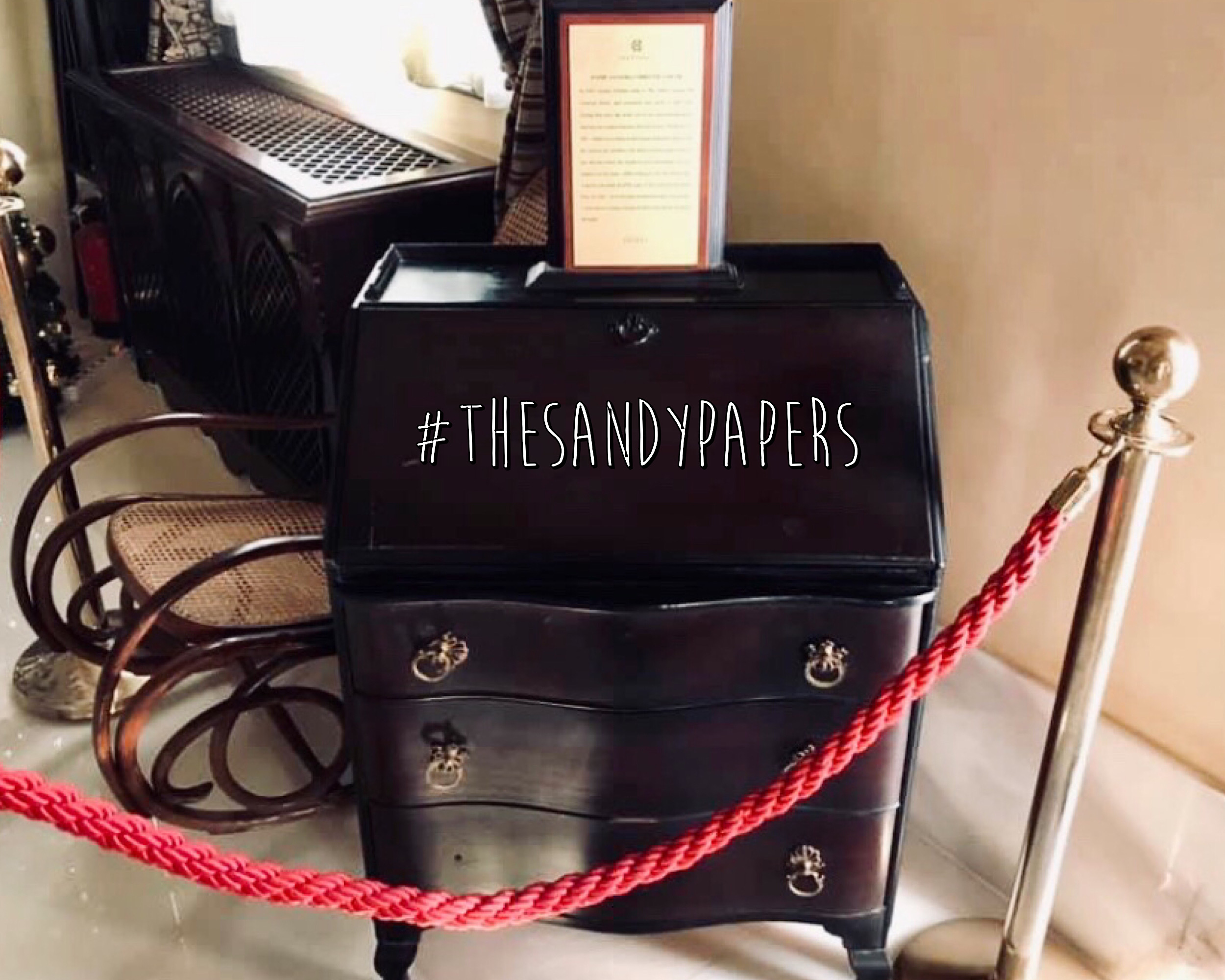 The desk and chair Agatha Christie used while writing Death on the Nile.

Speaking of sleuthing, did you know her suite is still available to see today?  It’s true!   After finding out that I was a Christie super-fan, the manager himself kindly extended the opportunity to tour Christie’s suite with him.   Thankfully, he didn’t notice; but, as we approached the beautiful birdcage elevator, I wiped away the tears before they hit my cheeks.

Big hallways and birdcage elevators transport you to a bygone era.

Situated one floor beneath the Winston Churchill Suite, you’ll find Suite 1201, the Agatha Christie Suite.  As I stood opposite the door, the anticipation of what was on the other side was killing me. 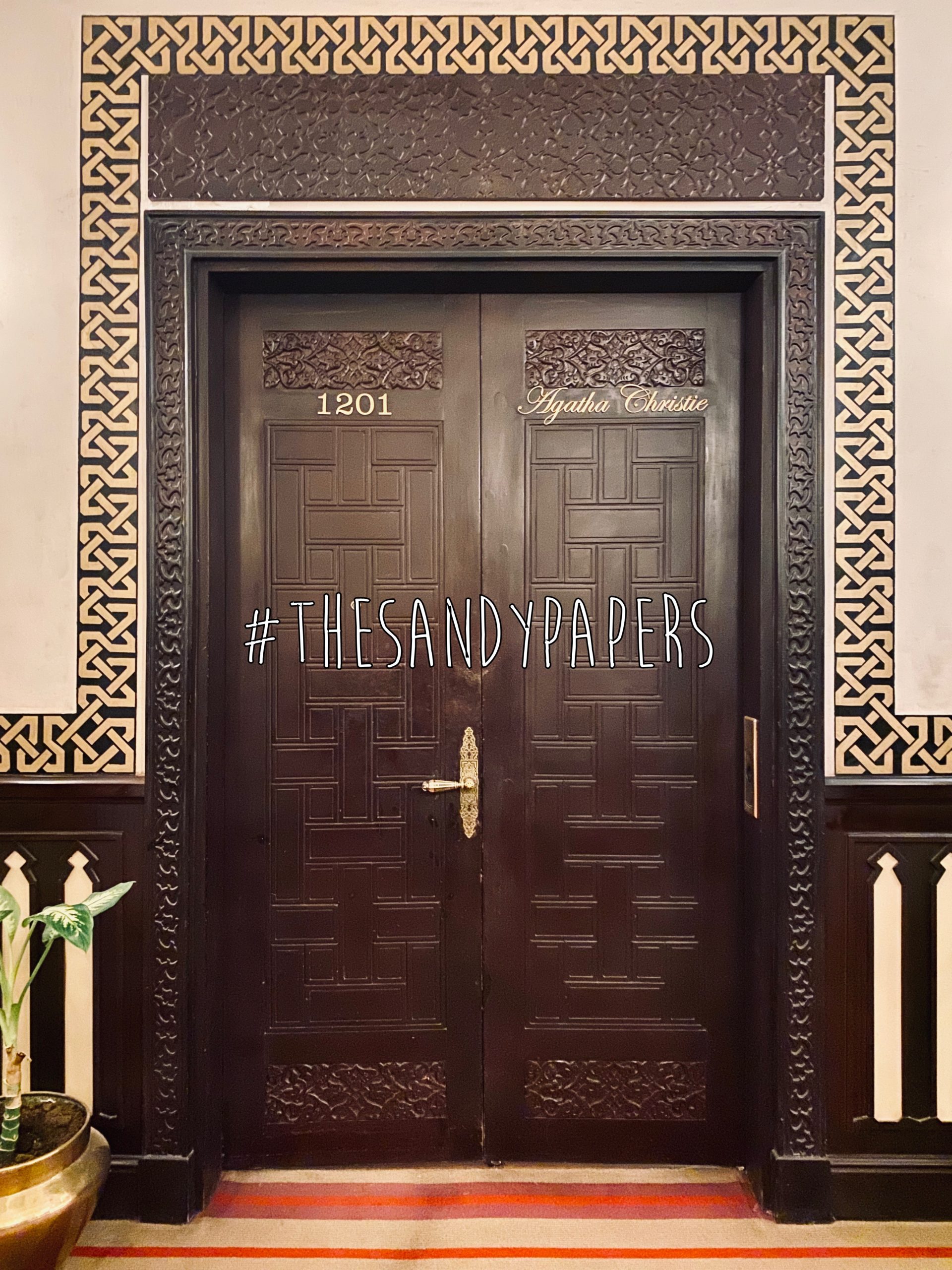 As we walked into the room, I struggled to take it all in.  Shades of chocolate, turquoise and gold.  Rich fabrics.  Ornate fixtures.  And that bathtub! 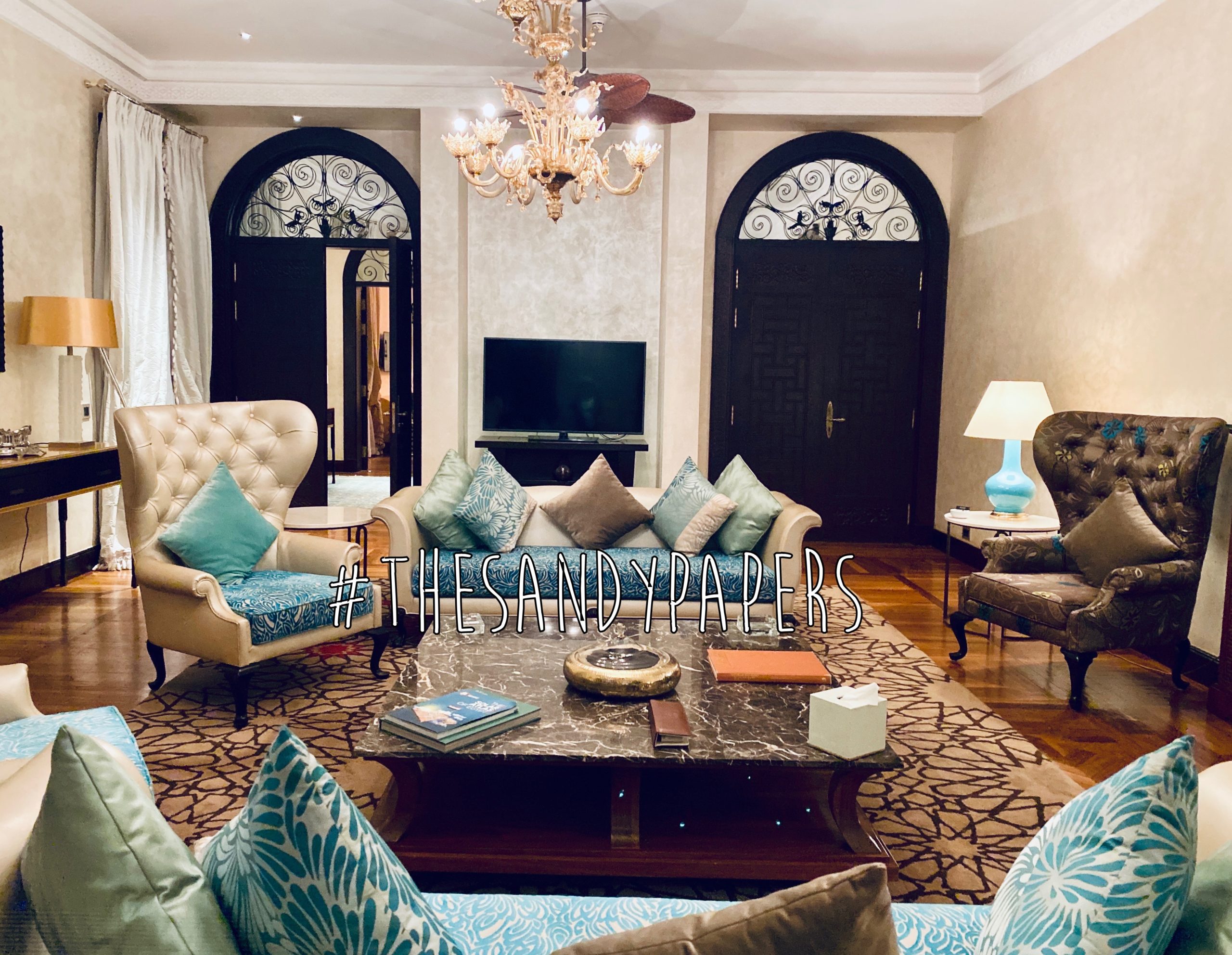 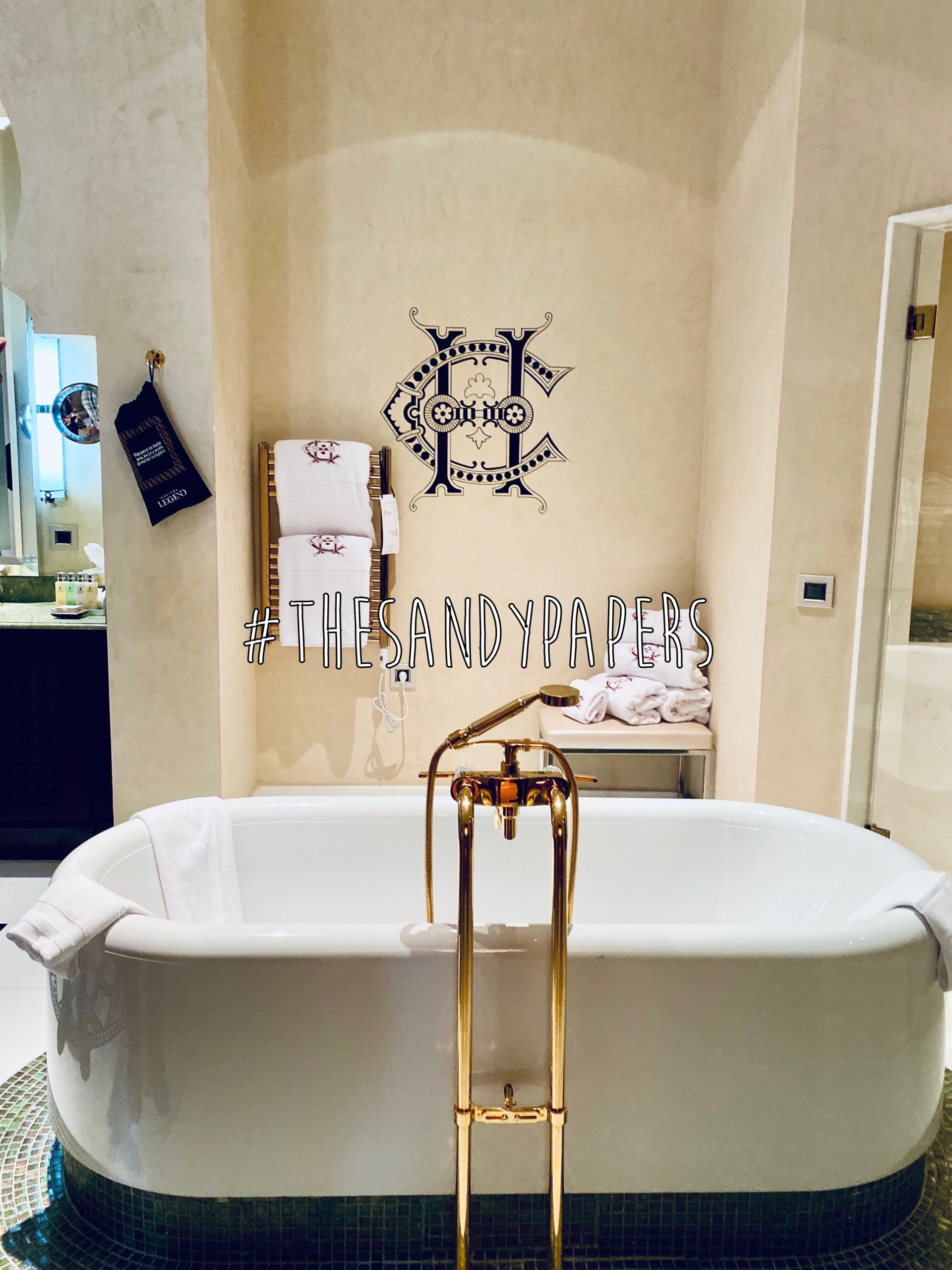 Subtle and sumptuous, the four-poster bed is covered in mauve-accented bedding and there are plenty of comfortable chairs in which to lounge.

Subtle and sumptuous, the four-poster bed is covered in mauve-accented bedding and there are plenty of comfortable chairs in which to lounge.

After touring her suite, it was time for tea.  Relaxing in a high-back chair on the outdoor terrace while taking in panoramic views of the Nile was the perfect way to while away the afternoon.   Soaking up the ambiance and the last remnants of Colonial British Egypt, it truly felt as if I had been transported to a bygone era.

In fact, Agatha Christie and Winston Churchill regularly crossed paths while she was a guest here and a photo of both of them is proudly on display.  (Christie and Churchill are in the middle.) 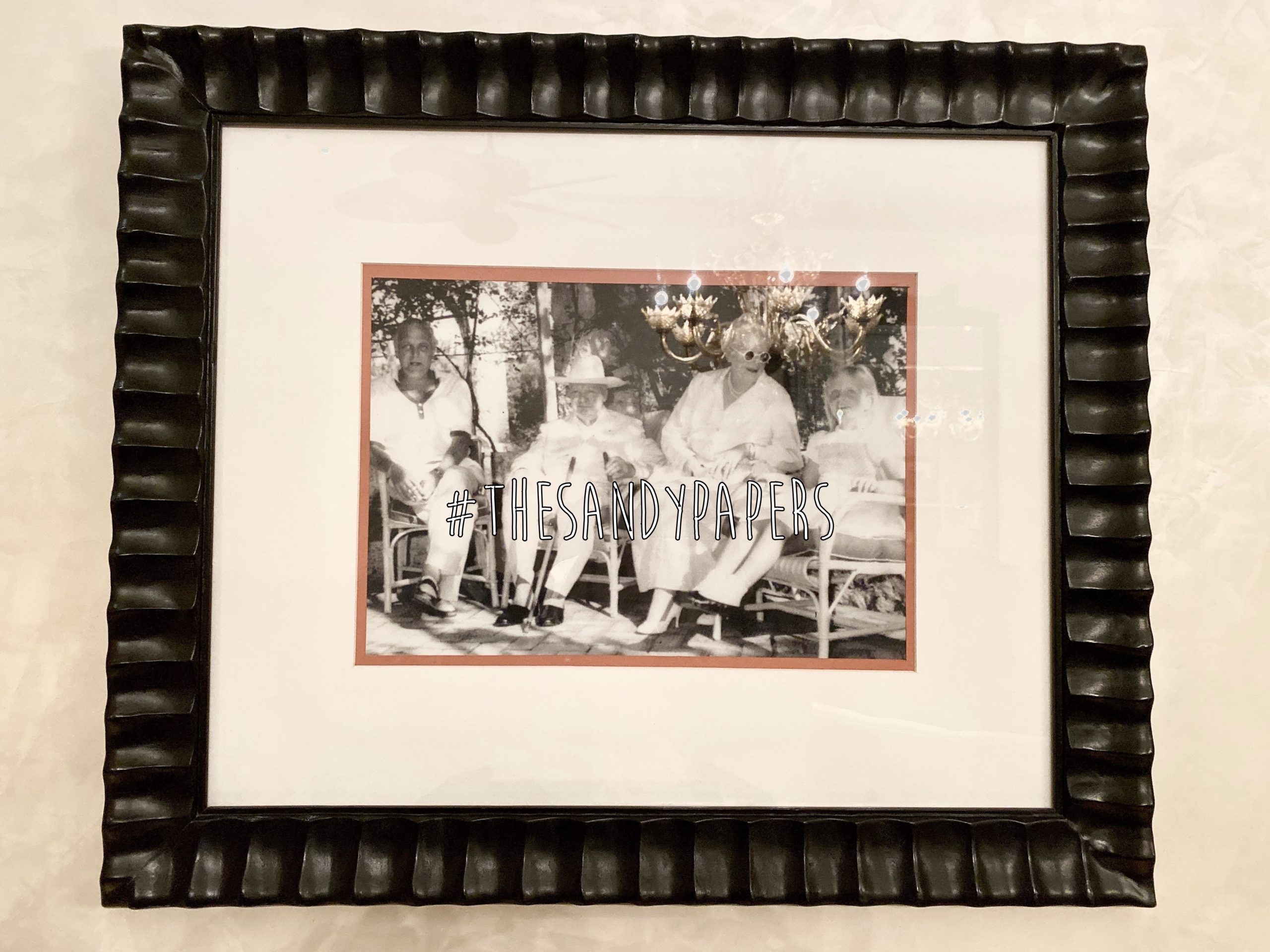 Agatha Christie and Winston Churchill are seated in the middle.

As my time at The Old Cataract came to an end, I popped by the gift shop in the hopes of finding the perfect little trinket to remember my stay — and you’ll never guess what I found.   Propped up in the back corner of the shop, almost as an afterthought, were copies of the two novels she wrote while staying here.   I snapped them up immediately! 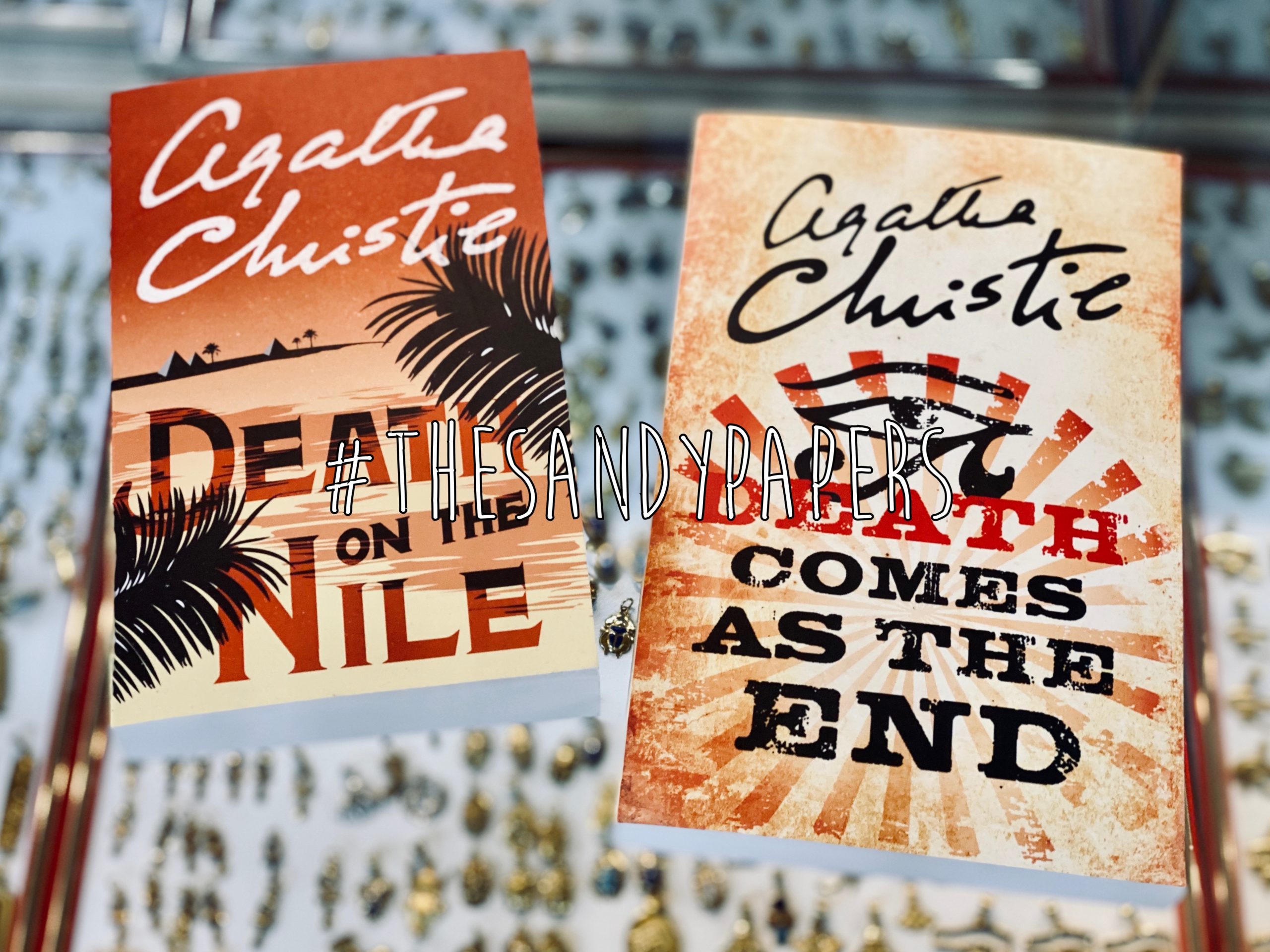 I will forever cherish the time I spent at the Old Cataract Hotel in Aswan.   Following in Agatha Christie’s footsteps was the ultimate fan-girl experience and sneaking around in her suite was as thrilling for me as reading one of her novels.   Christie fandom aside, the Old Cataract is an experience not to be missed and I cannot wait to return! 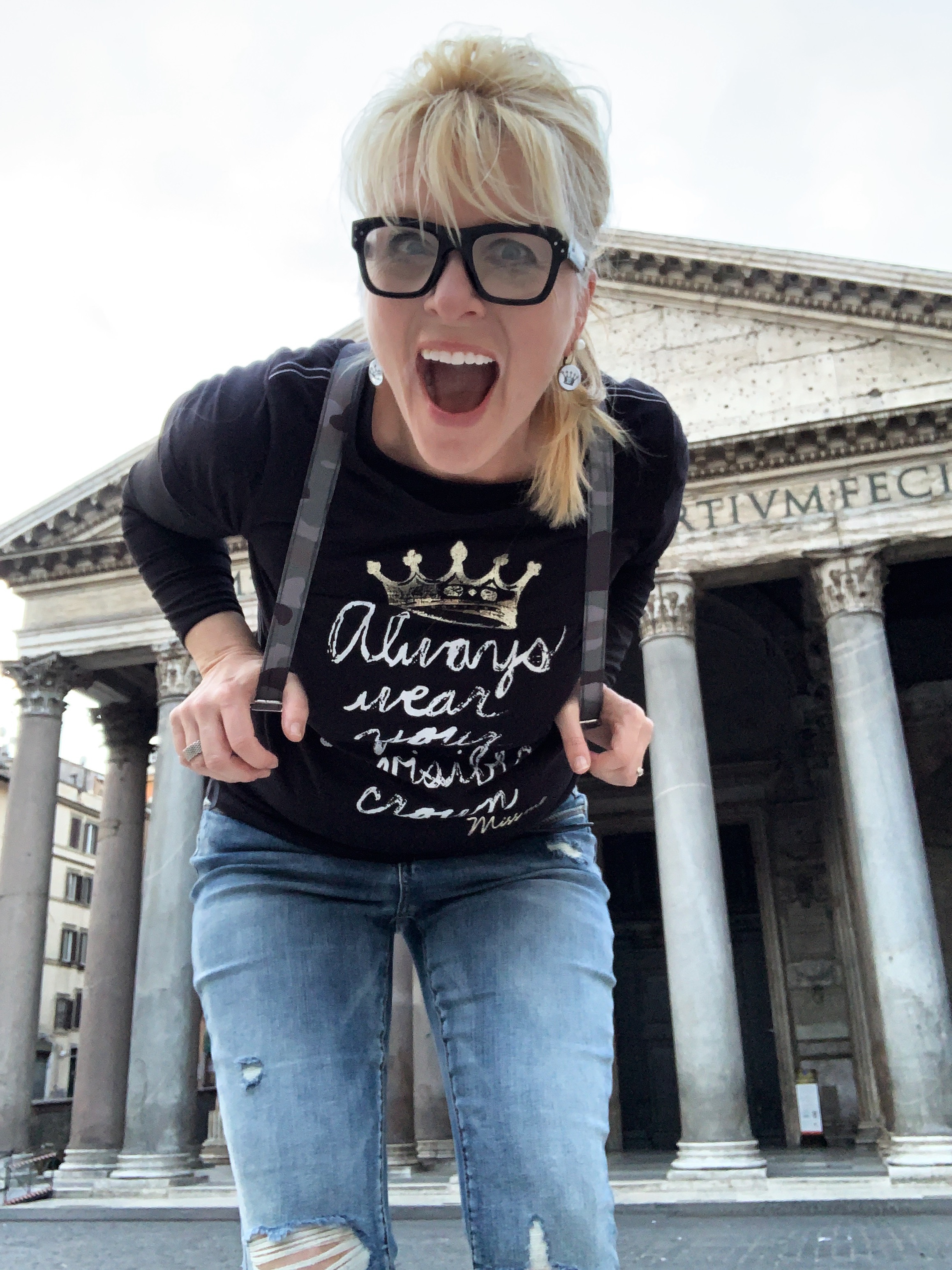